BERNINA International AG has been one of the world's leading sewing and embroidery machine manufacturers for more than 120 years.  The Swiss family-owned company's products are synonymous with innovation and precision. Above all, they are known for their durability. BERNINA sewing machines are used worldwide by women with a passion for sewing. Our passion is the development of products that allow you to put your creative ideas into practice. Here, you can find out what makes BERNINA special and learn about our values and our philosophy. We are proud of the fact that we are the only sewing machine manufacturer still producing in the western world. At our headquarters in Steckborn, Switzerland, we can look back on a tradition that dates back more than 120 years. 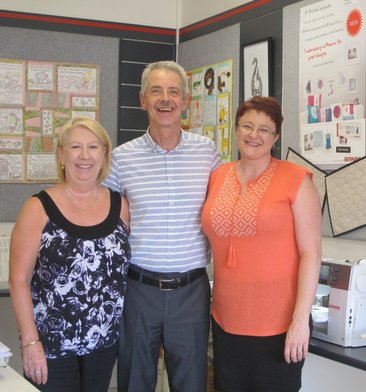 MARTIN and SHARON
My Bernina journey started in the mid 70’s when out of work I was “prompted” by mum to look for a job after only being out of work for some 2 weeks. Looking through the local paper I spotted an ad that I thought looked interesting…… a sewing machine mechanic. So I promptly rang the number to arrange an interview. This position was at Bernina NZ Head office and explained as “Needing a person to repair sewing machines / overlockers and knitting machines” for the Bernina network of dealers throughout New Zealand. The interview went well so I thought and I left feeling rather confident. Two days later I received a call from Bernina to advise that the job was mine.

How little did I realize that my life was about to change
I managed to sleep in on my first day and arrived 30 minutes late, what a great start. I was introduced to the Swiss mechanic, Hans who was currently running the workshop. Hans was employed on a two year contract from Bernina Switzerland and only had nine months to go before returning home. My job was to learn my trade from him before he left (no pressure) My first port of call was to go to the sewing room upstairs and learn how to sew and how to use the machine which incidentally was the Bernina 830 record, Bernina’s flag ship. I had great teachers for this and spent nearly two whole weeks there before I was given the okay to return to Hans.

Hans didn’t speak too much English and I not speaking any German made initial communications awkward, however this was soon overcome by the technical language being somewhat universal. I was taught so very thoroughly in every aspect being reminded that I would be told once, twice but not the third time. I only ever had to be told once, this style of training worked for me, this was the “Swiss way” Every move I made there was Hans checking and advising. I wrote absolutely everything down and learnt that these notes would prove to be invaluable as time went on. One of my first tasks taught was to completely disassemble an 830, document everything and re assemble back to a working machine with nothing left over. This was achieved over seven days under the watchful eye of Hans. I was able to place everything out in the order in which I removed all the parts thus making it easier to put back together.

I continued to learn the other Bernina products as time went on with the same degree of intense note taking. Some six months later Hans instructed me to yet again to completely disassemble and re assemble a Bernina 830 but this time I was on my own, so I dismantled the machine completely, laying everything out just like the first time. When I came to work the next day I found all the parts that I had removed the day before all in one box. This was the test for my note taking. All went well and the machine was completely re assemble back to a working machine with Hans again there but saying nothing.

The Love Affair Had Begun
I soon realized that there was no way that I could learn this trade with only about three months left before Hans was to return to Switzerland. As luck would have it Hans was able to continue his stay in New Zealand with Bernina NZ. What a relief for me. After about three years I was able to complete a repair from start to finish without Hans. As time moved on I was given more responsibility in training mechanics from the Bernina retail network and ultimately running the service department. I continued to learn this domestic industry over the next ten years with Hans as my trainer.

During this period I forged lifelong friendships with The Swiss from Bernina and NZ’s Bernina Dealer network and Hans whom I am still in contact with today and most grateful for his time spent with me and the patience that he showed. And yes I have been to the Bernina Factory in Switzerland which completed my understanding of a “Swiss Family Business” and the values that are associated with this.

Bernina has also taught me spare part procedures and sent me to various sales trainings and to various “Sewing Shows” to help with my Bernina knowledge base, something that would prove to be invaluable for my Bernina future which was about to unfold. Up to this point of my Bernina career I’d had the time of my Life, this job fitted me like a “Hand in a Glove”

At about the ten / twelve year mark of working for Bernina NZ an opportunity presented itself to take on a Bernina dealership at an existing store that wasn’t going too well. This next challenge I accepted and at this point left Bernina NZ head office. I then set about doing it the Bernina way implementing everything that Bernina had taught me from staff to store nothing was left unturned until the store had the Bernina feel for the customer the job would not be complete. After a two year period of trading we were advised by Bernina NZ that we had been rated and made it into the top ten dealership list. Such a great reward for so much hard work by all. It was at this time we decided to move to Australia and make our life there, not an easy decision with three children plus having to leave our family’s behind. We were so fortunate to be able travel to Europe and America before buying five one way tickets to Brisbane. It was at this time while visiting Bernina Switzerland, by chance arriving there at the same time as a Bernina Import meeting was being held that a job opportunity as a Bernina technical manager was offered, only thing was it was in Toronto. After thinking long and hard about “The job of a life time” offer we decided to continue with our first thoughts and carry on to Brisbane. Prior to leaving NZ I had written to Bernina Australia and questioned them if there were any openings for someone like myself. There reply was a little open ended but positive, that’s all I needed.

Once we had arrived in this fab place Brisbane we sorted out the usual things like a place to live, children to school etc and then made contact and a time to go visit those in charge of Bernina at the Qld office. They were able to take me around to the local Bernina stockists and from those that we visited I managed to pick up their Bernina repair work which I initially did from home. I remain thankful for this time given to me by Bernina Qld as this was our new beginning with the “Bernina Family”

After about the one year mark it was decided that we would get back into Bernina retail and set about employing my Bernina knowledge once again. We decided that Chermside was the place to be for our future in this industry and our Bernina ONLY store was born. We had our fair share of critics at the time because this was to be a mono brand store while most other stores in Qld that retailed sewing machines were multi brand stores and their thoughts were that we would be short lived.

Our store is located just north of the Brisbane CBD. Here we have worked tirelessly with our staff for over 20 years to bring to our customer the Bernina service we know. We believe our success is attributed to many different things we employ like running Bernina Club, in store technical support, tuition for products we sell, product knowledge, doing what you say you’re going to do, being honest with every customer that walks through our door, making sure that the customer wants to come back and making them feel like they belong to the “Bernina Family” and yes it is true “The Customer is always right”

And Yes ……. We are PASSIONATE about Sewing and what we do.
We are both (Martin & Sharon) proud of what we have achieved to date with our wonderful committed staff at Bernina Chermside. Over our time we have made so many great friendships way beyond just being customers and witness almost on a daily basis the sewing talent our customers have. We shall continue doing what’s needed to provide the very best service we can to make it a pleasure for our customer to come and shop or simply visit us.

Still having the time of my life!

​Here is a link to a little video about our store - we hope you enjoy taking a look https://www.youtube.com/watch?v=AzFBk5006MY
TRACEY
Tracey has been around sewing her entire life.  Her mother first introduced her to sewing as a young child and her passion continues and she is now sharing that passion with her young daughter. Tracey believes that you can always learn something new in the world of sewing.  Tracey purchased her first Bernina approximately 17 years ago and loves Bernina and everything about the brand.  Tracey has a passion for teaching young children to sew and grow their love of creating.
OLIVIA
As a young child I observed my mother sew. This is where my love of sewing really began to grow. I started sewing small basic things when I was in high school. When I got married and had children I began to sew clothes and other things for my children. Over the last ten years I have been working in the sewing industry. During this time I began to learn basic patchwork techniques. My love of sewing has gradually been passed on to one of my daughters, who has really started to love sewing herself.